A CONVERSATION WITH NICK CAVE

This is an English translation of the original French article.

Nick Cave, my old idol from my rowdy teenage and post-teenage years, came to perform in my new home town, Montreal, in a show of a very peculiar format: a compound of buddy night out, grade school class (where we naturally played the pupils’ part), master class, and psychotherapy session. And a concerto for piano and voice, of course. In a magnificent and unique setting: the Saint-Jean-Baptiste Church. 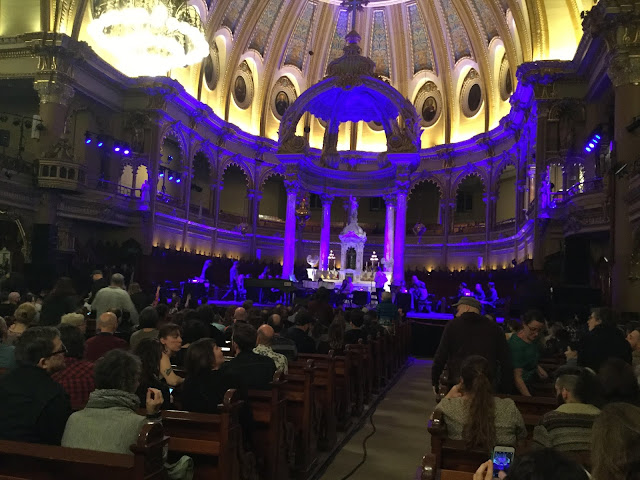 I find it hard to count off the host of ways in which this fellow has been influencing my life, shaping the person that I became, feeding my dreams, populating and infesting my imagination. Above all, he inspired me to start making music, writing lyrics, and he helped me muster the courage and the strength to be what I am, for the best and for the worst. But he also imbued me with anxiety; me, who was already anxious enough, slyly, over the years. For me he was like a distant and mocking friend (to some extent, like I imagined Kurt Cobain back then) whom I still admired while blaming him for being so mean. Like a father that I loathed while clutching at his lessons, suppressing the desire to break his law. I did break it much later, when I turned my back on that whole ghoulish side of my musical tastes. 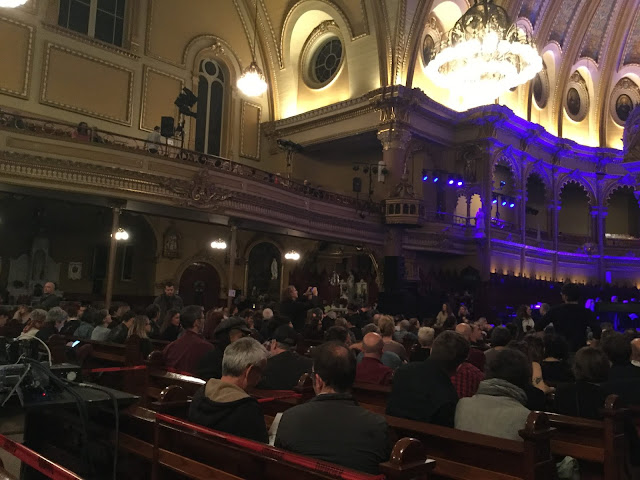 In fact I  am still turning my back on it. However, I told myself that life is short, that one would better accept it as it is, own up what one’s done, take responsibility for the marks of the past, and fully embody one’s being here below.

I discovered him at the age of 15 thanks to my high school classmate, Moha. His father was the owner of an admirable collection of art-rock (Nick Cave, Pink Floyd), alternative jazz (Oregon, Tuxedomoon), and alternative rock (James) CDs and cassettes. In fact, a ragbag of styles and artists which had in common their belonging to that same cold yet intriguing scale, rich in colors and states of mind. I already knew that infamous collaboration with Kylie Minogue but I didn’t have the faintest idea how diverse, rich in colors and unconventional Cave’s music was. On the other hand, ‘Where the Wild Roses Grow’ summarizes really well the finicky Australian’s customary palette; his musical world is sluggish, solemn, cheerless, crooner-like, romantic, grotesque, clownish, and vulgar. Provocative and disruptive too. Just think of the oddness of the very idea of that ominous collaboration with a wishy-washy pop diva, at that in a setting that looks as romantic as cheesy. 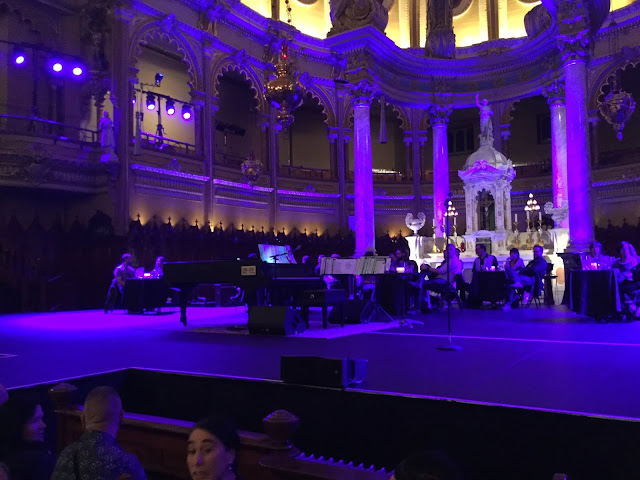 So there we go – I saw him twenty one years later, not in the city that served as a setting for my first Cave-driven mutations, but in a city that I had never though I would inhabit one day (I am still having a hard time realizing this). Right next to my favorite Portuguese greasy spoon, in an ever more autumnal Montreal. A stone’s throw away from the penultimate resting place of Cave’s prime inspirer Leonard Cohen.

Describing all that I lived out and felt there would be fairly gruelling. It is not an easy thing to play the journalist when what you saw has turned you upside down. Others already gave their own account of the happening. The distinctive format of the tour (which started in Europe) has certainly been the subject of lengthy studies and reflections. It was a kind of “conversation” that took on the form of an interview or even an interrogation with Cave. 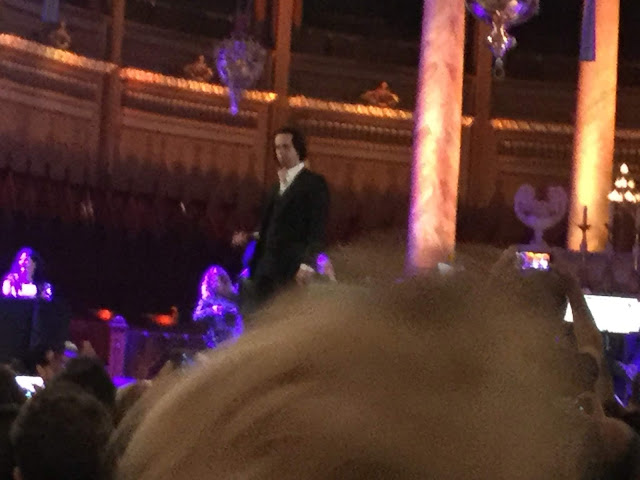 Some of the people that took the floor let out their anxieties, shared their past or current suffering, or tries to pick quarrels with him (they accused him of having been too mean with Mick Harvey, which Cave refuted), while others attempted to bluntly mock him (by asking him to sing them “Happy Birthday” - a challenge that Cave faced with humility and stoicism) or approached him in French, even though it was obvious that the Black Crow King did not speak the language of either Corneille or Michel Tremblay. But the most numerous ones were those who talked of the passion that the beauty of his music instills in them.
x 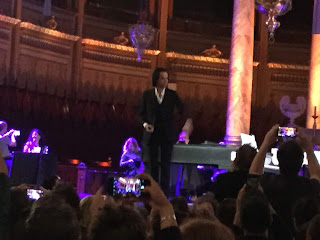 The setlist was fairly varied – from classic titles like “The Ship Song“, “Weeping Song“ and “The Mercy Seat“ to more recent enchanting refrains (”Jubilee Street”, ”Girl in Amber”), to disconcerting pious tunes like “God is in the House“, and finally the bloodthirsty story of “Stagger Lee“ (at first, Cave said that he did not intend to play that song, since we were in a church, but this was obviously one of his eerie jokes). The ambivalence that is so him! 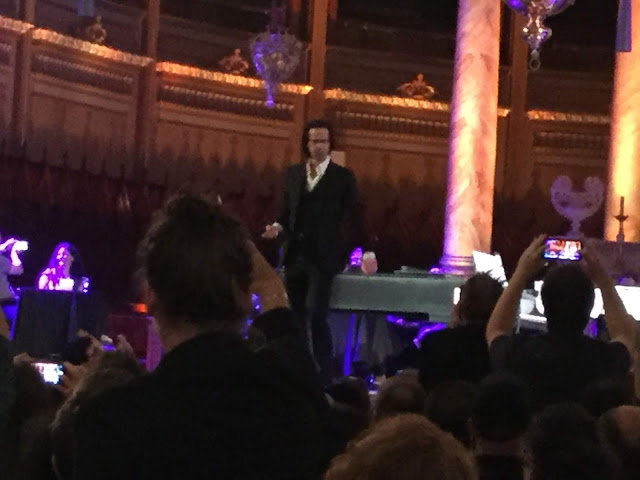 We had turned off our mobile phones, at our host’s request. He allowed us to take pictures of him for about a minute, after which he cracked the whip: “Now put your fucking phones away!”. And for a reason – being left without the Internet let us completely plunge into the “conversation”, hence its healing effect. 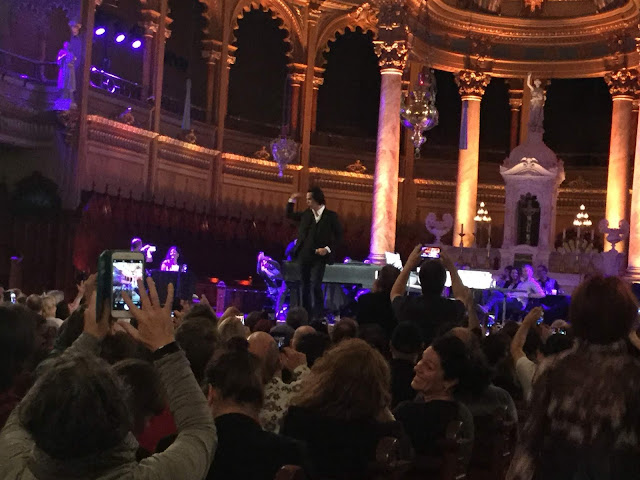 I ordered his new double album, which is due in less than a weak: “Ghosteen”. I also bought a T-shirt with the logo of the website The Red Hand Files, which Cave is in the process of creating in collaboration with his many fans. I rarely buy any band merchandise other than the music itself. But this case feels different – I feel the urge to show my affinity with Cave’s philosophy, however desultory it may be.


Here is a video that I shot while lining up in front of the church. 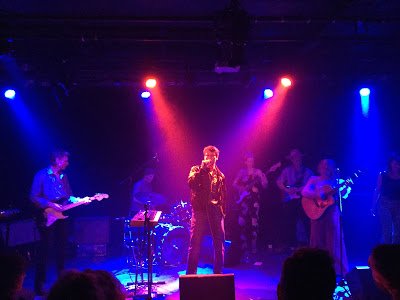